When Roula Khalaf was announced as the new editor of the Financial Times back in 2019, news reports led on her becoming the publication’s first female editor in its 131 year-old lifetime. Little did she know the start of her editorship would instead be dominated by the biggest global event of the our lifetime – the coronavirus pandemic.

But, even in the wake of a health disaster that could have expedited the death of print newspapers, she has kept a laser sharp focus on diversity. “You can’t turn on a switch and say you want diversity,” she says in conversation at a Women in Journalism event. “It takes years of effort and raising awareness, and having champions within the newsroom who believe in it and will do it credit.”

So, what does that look like at the FT? Firstly, there are firm targets for gender equality in their newsroom, as well as providing fair representation of society. “We have targets, I like targets,” she explains.

“You can’t turn on a switch and say you want diversity. It takes years of effort and raising awareness, and having champions within the newsroom who believe in it and will do it credit."
Roula Khalaf

For example, They are partners of the BBC’s 50:50 project, aiming for an equal balance of reporters, editors, and experts published in stories. Tools such as JanetBot and She Said He Said Bot, developed during her time as deputy editor, help to show a real-time analysis of their coverage.

The former automatically counts images of women on The Financial Times digital home page, whilst the latter provides statistics around the number of quotes by women within articles. However, Roula is keen to stress that these analysis’ do not impose anything upon writers aside from alerting them when female representation has fallen below the minimum – but she believes they’re vital in creating a culture that rejects each and every quote having come from a man.

She says that the fact desk after desk have become “newsroom champions” is a success, with teams also pulling together lists of women experts to approach for comment.

‘I Was Told That I Was Too Softly Spoken’

When asked about her own journey as a woman reporter and editor, she says she was warned by many colleagues her role as deputy editor could be a bad move for her career, as “the deputy rarely gets the prize”. However, she says the mentoring she received from her predecessor Lionel Barber means they are both “similar in the way we think about stories”.

“I think the difference in being a woman is one of style,” she continues. “My style is more casual, which people notice and, I hope, appreciate, and I have different interests. I was told when I was setting out that I was too softly spoken and that that would not be good for my career. What that essentially meant, I think, was that I wasn’t a man.”

“Soft spoken is code for not having a deep, male voice,” she continues. However, she says that her experiences of being spoken over and ignored have only strengthened her demeanour, learning to respectfully assert herself, as well as asking her boss to point it out when he noticed similar problems. “I will stand up in a meeting and say ‘I am trying to speak’ in a nice way, not in an aggressive way, but pointing it out to people.”

She also thinks it’s important to be honest about the juggles of editorship and home life. “I remember very clearly when I was deputy editor and was taking conference and one day I was late and I said to everyone it was because my son just wouldn’t go into school that morning and had a tantrum. And several women emailed me afterwards and said it is so nice of you to have said this because this is how we feel, and they appreciated that I had similar experiences.”

For Roula, this diversity push also extends to who reads the paper. Again, this was overwhelmingly white male so the team held focus groups to ask women directly why they didn’t read the paper. Some considered The Financial Times too intimidating, which has been combatted by taking care over picture selection, as well as writing more explainers than before.

“Part of the problem is that it feels intimidating because of its reputation,” says Roula. “The image of the FT is more intimidating than the content.”

“Part of the problem is that it feels intimidating because of its reputation. The image of the FT is more intimidating than the content."
Roula Khalaf

However, while gender diversity has clearly increased at the paper over the last few years, much more work is needed to include writers of colour. Roula admits there are “very few” journalists of colour working in the editorial teams at the FT, something she’s determined to change through a new campaign and targets. As she wrote to her team not long ago, the aftermath of George Floyd’s murder has highlighted how much harder they need to work as a team to produce a more diverse environment.

The team have already put in place trainee and internship roles to recruit more BAME staff, which Roula says have “opened minds and attention to recruits that they may not have come across before”. However, she acknowledges that is they are going to “make any difference and move the needle” there needs to be work done at every level of the organisation. “We can’t wait 20 years – we’re not going to wait 20 years to have a black assistant editor. So we have got to start recruiting new people at every level of the organisation,” she continues.

To help address this, a new talent acquisition manager has been hired to advise on both recruitment and the newsroom environment. They have also set up a working group and aims to reach a target of 22 percent BAME staff by the end of next year. “This is a new drive. It’s very new. “I wish we worked on it faster and harder before, but the focus in recent years has very much been on gender diversity.”

So, would Roula recommend a journalism job to young people? On this she is certain. “Yes, this is a profession with a future. It’s the best profession you will ever have – it’s not just a job, it’s an adventure.” 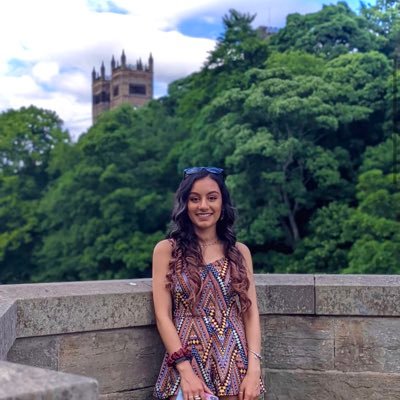 Meghna Amin a freelance journalist, currently completing her NCTJ Diploma at News Associates. She previously studied at Durham University, where she was the student life editor of The Bubble.

Meghna also has bylines in The Daily Mail, Empoword Journalism and The Indiependent.

A Day In The Life...
Life On the Falklands: What It’s Like Being A Journalist 8,000 Miles Away